We spent a lot of time mulling over the bad dimple, researching, and making it worse.  We got as far as we could without making a decision, because we wanted to wait to hear from Van’s.  We did get the F-1010, F-1011, and F-1012 bulkheads with their various bits riveted together, but sadly no pictures. 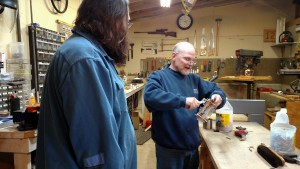 Yesterday, I damaged a hole while dimpling the F1073-L side skin. 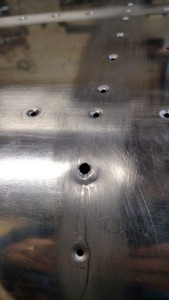 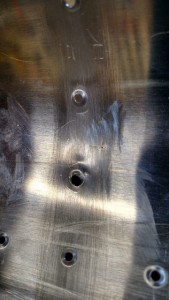 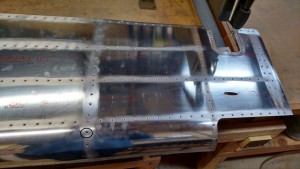 I read through many of the figure 8 fixes on the vansairforce.com forum, but none of them were quite as bad as mine. The original hole location dimple was cracked, which meant I couldn’t just put the rivet in the hole and add some epoxy when I put it all together. I wrote Van’s, but instead of losing an entire day of working on the airplane, I decided to file it out until the cracks were gone, then drill the hole out to #19 (which was close to round, but still not quite), dimple it for a #8 screw and install a nutplate on the F1010. This turns out to have been a terrible decision. The dimpling for a #8 screw caused further cracks, and seems to have enlarged the hole as well. It’s now roughly 3/16″, and has cracks: 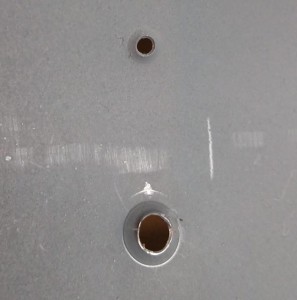 At this point, I see only 3 options:

(1) Buy a new skin. This is what I’m planning to do, absent advice to the contrary.

(2) Fabricate a patch for the skin. Given that from what I’ve read in my copy of Aircraft Structural Technician, I’d need a huge patch (something big enough for a dozen or so rivets). I’d also have to have the patch match the curve in the skin, which I think would be very difficult. Also very, very ugly. I’m not looking to build a show-quality plane, but a giant patch resulting from a simple mistake with the dimpler is just not very appealing. I’d rather spend the money on the new skin, which I’m sure will be a rather large pile of money. A patch seems like a good option if I’d already built the plane, but at this point I can buy a new 1073 and be as good as new.

(3) Leave out this rivet entirely. Drill out with a unibit until the cracks are gone, fill with epoxy and hope for the best. I’m only willing to do this if someone at Van’s thinks this is an acceptable option. It seems like a bad idea to me, but I’m no aeronautical engineer. Note that I cannot add a rivet to either side of the botched one, as this is in a tab on the curve of the F-1010 and doing so will take me way too close to the edge of the tab.

Otherwise, a good 6 hours of dimpling went on.