I started by clamping the spar caps I prepared last week to the front spar we deburred yesterday.  It’s nice to start the day with something other than deburring.  I was bothered by the fact that the spar caps stuck up 1/16″ from the spar flange: 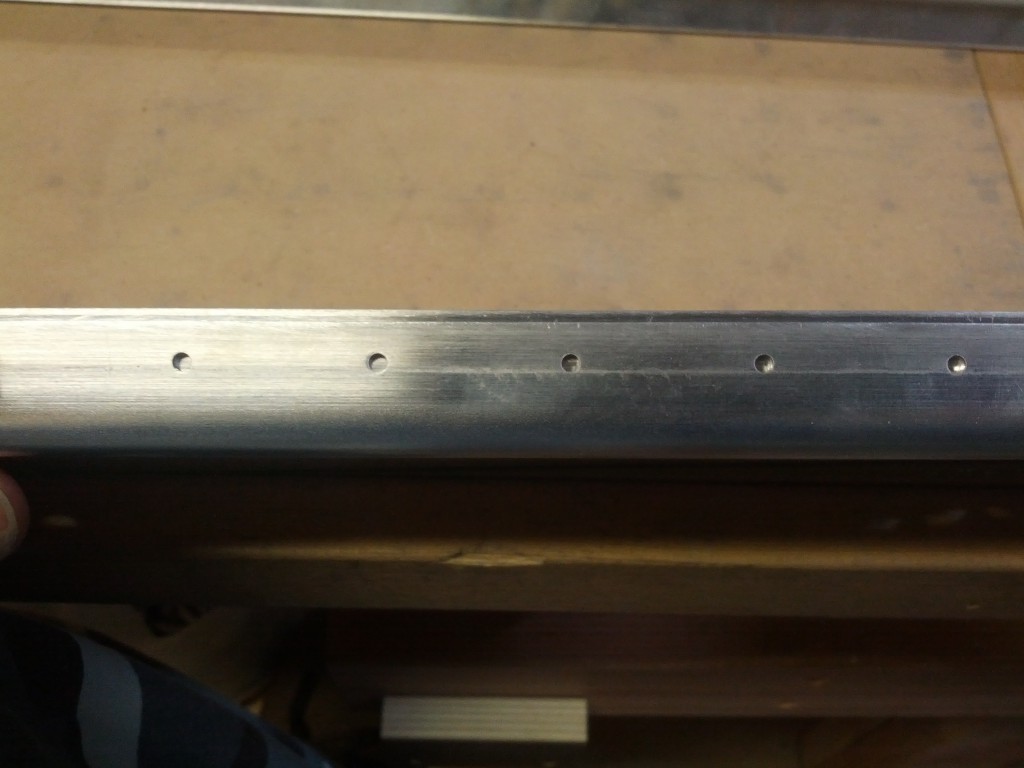 The VS spar caps did not do this.  I spent forever searching the internet for pictures and finally found one that showed exactly the same thing as mine, with no comment.  I mentioned it on VAF and received a reply that said his was like this as well.  So I finally decided to ignore it, after wasting an hour trying to figure out what the problem might be.  Still, better to waste an hour verifying something that seems wrong than messing up something like a HS spar that costs $200 to ship.

I did lots of match drilling.  Here’s a pile of metal that’s not going in the airplane. 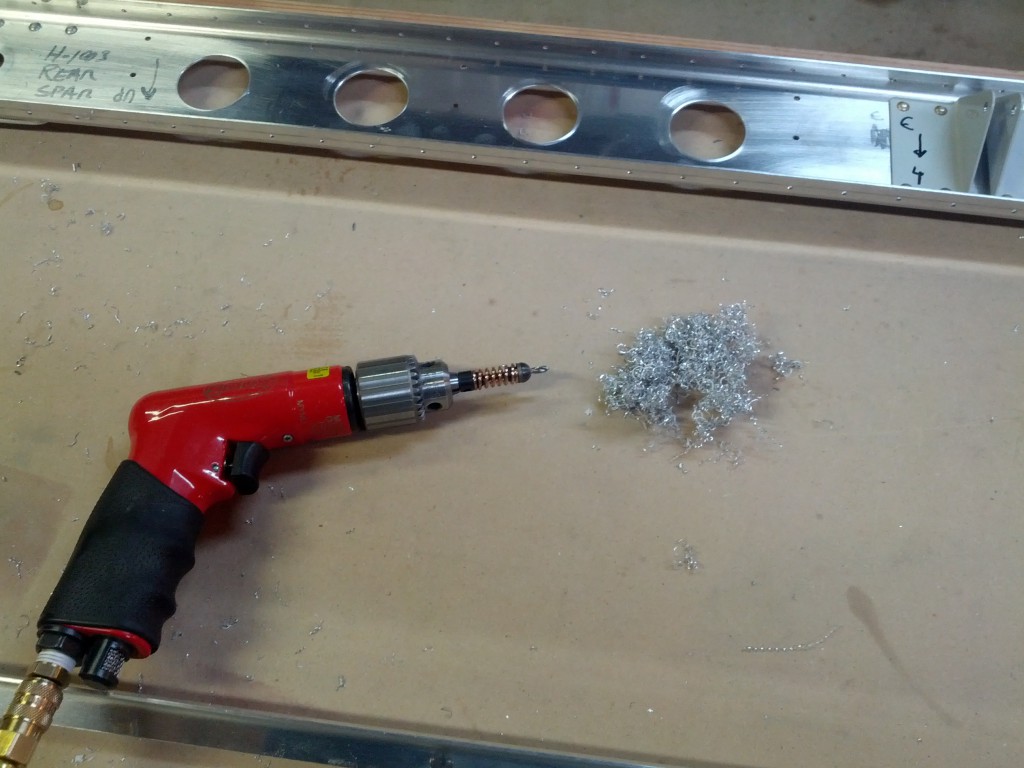 Spar doubler cleco’ed in, along with the iflyrv10 brackets.  The brackets I made came out 1/32″ too small.  Rather than ordering another piece of aluminum stock from Van’s, I decided to just spend $25 on premade brackets.  Randy pointed out yesterday that they’re exactly the same size as mine that are 1/32″ too small.  Makes me feel better about my workmanship anyway. 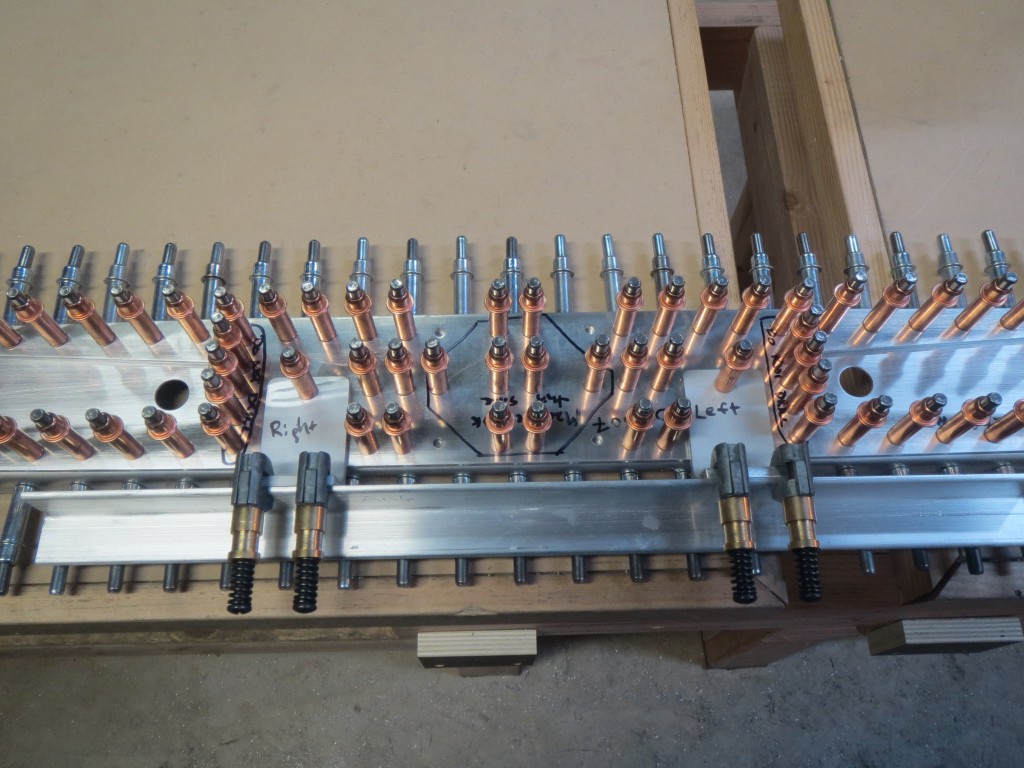 So many clecos.  And each of those holes had to be drilled (not just match drilled), which means lots of drilling… 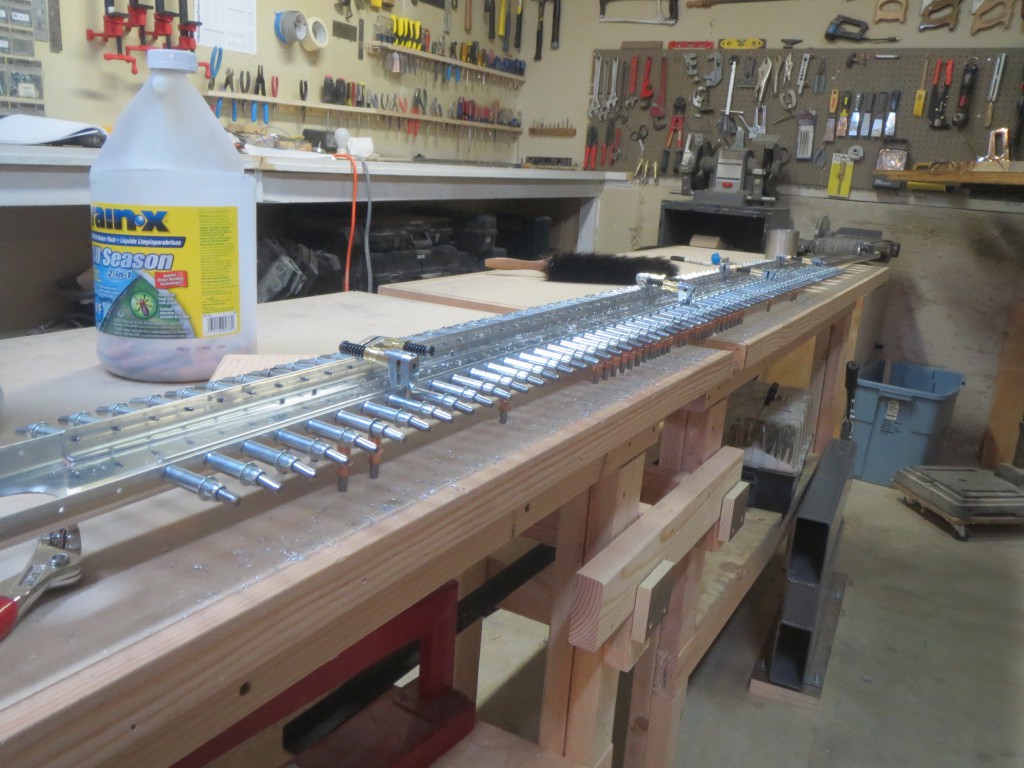 I mentioned it before, but it’s huge.  Up until this point, it’s easy to forget that airplanes are large.  This spar is about 12 feet long. 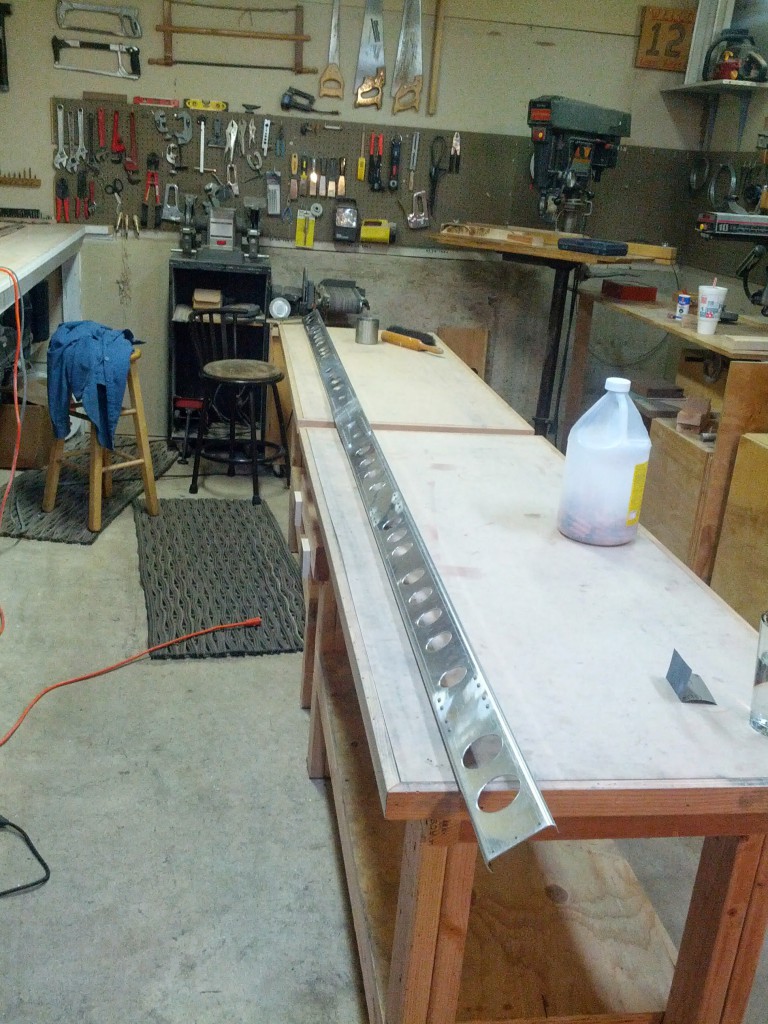 We spent most of the day deburring the front and rear spars for the horizontal stabilizer.  These are the longest single parts in the tail kit.  Ours were poking out of the crate that FedEx destroyed, so these are actually the replacements.  They came right about on time.

I’m really unsure how much deburring is actually necessary.  Randy thinks I’m making too big a deal about it, as I want to make sure that the surface is absolutely smooth with no visible pits.  He’s content as long it feels smooth and you can’t catch anything with a fingernail. He’s probably right, but then my fingernail seems to be more sensitive than his.  So much of building this airplane seems to be this way: how much is enough?  You can always find someone who does more and someone who does less.  And if you spend too much time trying to find the right answer on the internet, you’ll never get the plane built.

I keep telling Randy that none of this matters, because to hear some folks tell it, we’re just going to find a pile of aluminum oxide in the hangar where our airplane used to be because we’ve decided not to prime the interior surfaces.

There’s not much in the way of exciting pictures from today, because deburring is even more boring to photograph than to perform.  Also, the Cleco Vixen usually photographs us, but she apparently had more amusing things to do today.

I now have several pieces of aluminum functioning as tattoos in my fingers.  I’m not sure if I should be concerned about this or not. 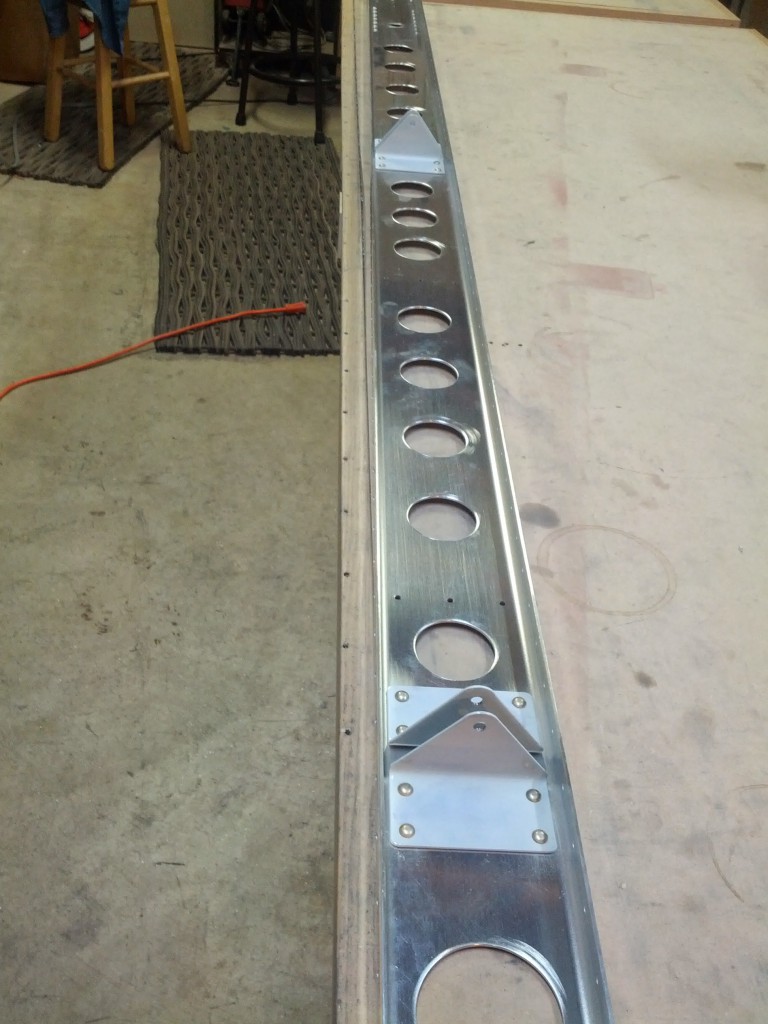 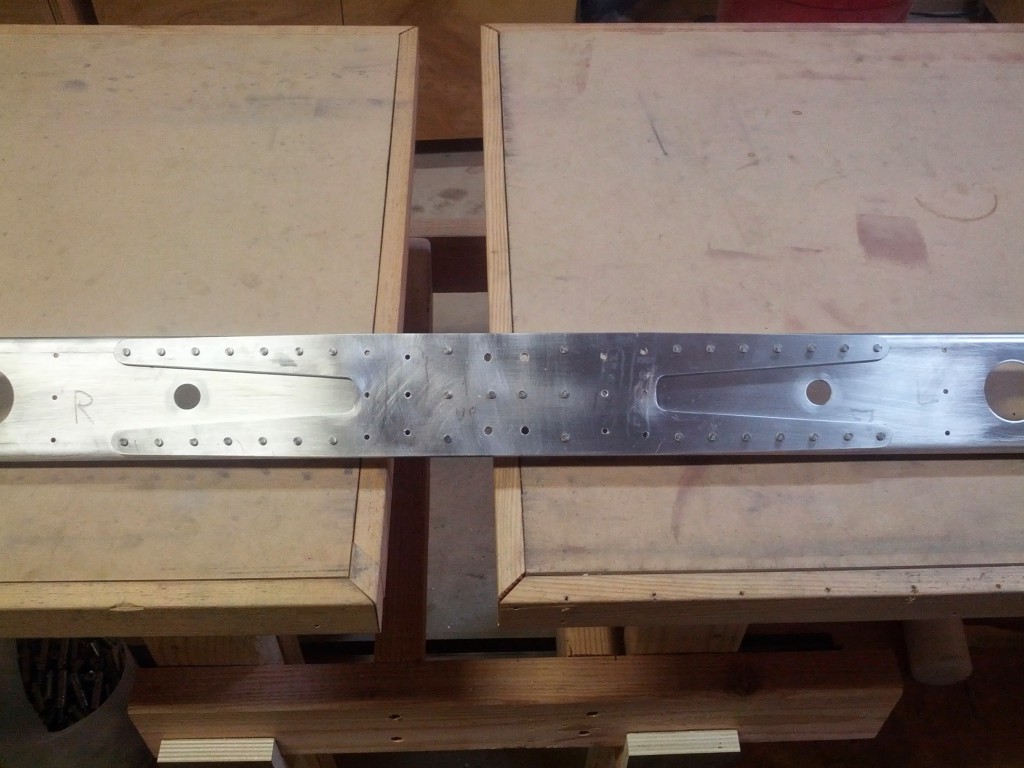 Sorry Tracey, no action shots of Randy today simply because I forgot.